Continuing the countdown of my favourite 11 horror films. 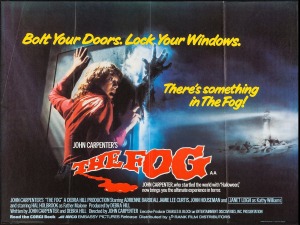 John Carpenter has made some wonderful films. “Assault on Precinct 13”, “Halloween”, “Prince of Darkness” and “Escape From New York” to name but four. But there is something about “The Fog” that trumps them all for me. I’ve always loved ghost stories far more than I’ve liked monster movies and “The Fog” does the ghost story wonderfully. The cast is absolutely stellar. Adrienne Barbeau, Jamie Lee Curtis, Tom Atkins, John Houseman, Janet Leigh and Hal Holbrook are all superb. The script is fantastic with hardly a word wasted and  Carpenter’s direction is at his best but I’ll save the last word for the cinematography. Dean Cundey, the director of photography, the man who went on to work on the ‘Back To The Future’ films, ‘Jurassic Park’ and ‘Apollo 13’, is outstanding on ‘The Fog’. It’s a beautiful picture with it’s wonderful seascapes and lighthouse tower. Basically it’s a film that, I think, should be hanging in an art gallery. Not only that but it’s scary too! What more could you ask for. This is a film that screams ‘halloween’ to me and it’s one I reach for when I fancy some good old fashion scares.